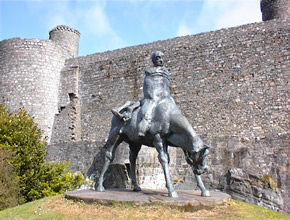 In the heart of the Snowdonia National Park over-looking Tremadog Bay and the Lleyn Peninsula lies the town of Harlech. Dominated by the Rhinog mountain range and its medieval castle, it is one of Meirionydd's best kept secrets.

Its steep winding streets, traditional Welsh architecture and magnificent natural setting make it a memorable holiday destination and the perfect base for exploring Snowdonia, the heartland of Welsh language and culture.

In Welsh mythology Harlech is forever associated with the legend of Branwen, the daughter of Llyr, whose story is recorded in the masterpiece of Medieval Welsh literature, The Mabinogion. "Bendigeidfran son of Llyr ... was at Harlech in Ardudwy, at his court. And they were seated upon the rock of Harlech overlooking the sea..."

On this rugged promontory, a spur of the Harlech Dome (the oldest known geological rock formation in the world) now stands the architectural grandeur of Harlech Castle. Framed by the mountains of Snowdonia, the Castle's unrivalled setting has made it one of the best loved castles in the British Isles.

The castle, now a World Heritage listed site was one of Edward 1's "iron ring" of fortresses, built in the 13th century to subdue the newly conquered lands of North Wales. 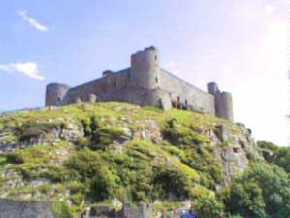 In 1404 the Castle was captured by Owain Glyndwr during the great national uprising of the Welsh. Harlech became Glyndwr's official residence and court and the place to which he summoned parliaments of his supporters. It was here that he was formally crowned as Prince of Wales, witnessed by envoys from Scotland, France and Spain. The Castle was recaptured by the English in 1409 under the command of Harry of Monmouth, the future King Henry V and victor of Agincourt. Sixty years later Harlech was one of the last Lancastrian strongholds during the Wars of the Roses.

"Kyng Edward", wrote the Chronicler John Warkworth, "was possessed of alle Englande excepte a castelle in Northe Wales called Harlake." The Castle gave shelter to Henry VI's Queen, Margaret of Anjou before finally surrendering after a fierce and lengthy resistance to the Yorkist seige in 1468. It was from this seige that the song "Men of Harlech" is said to originate. During the Civil War Harlech was defended for the king and was the last Royalist castle to fall. Its surrender to the besieging Parliament forces in March of 1647 marked the end of the Civil War and brought Oliver Cromwell to the region.

Today , the Castle is open to the public throughout the year and is the setting for a wide range of cultural events from concerts to displays by the Harlech Medieval Society.

The town and its surrounding area have long been a source of inspiration for artists and writers. The poet Robert Graves was a frequent visitor and recorded his memories of childhood holidays in Harlech before the First World War. Harlech's Theatre Ardudwy hosts an impressive programme of films, exhibitions, concerts and plays both by local and international artists and companies throughout the year. In the autumn Harlech plays host to a bi-annual Art Festival, exhibiting work by artists from around the world with a strong Welsh presence. 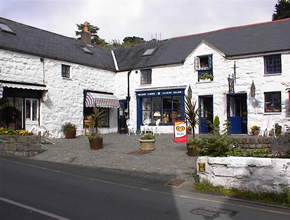 To the north, the Nature Conservancy Reserve of Morfa Harlech looks over the Dwyryd Estuary to the Italianate village of Portmeirion. To the south lies Llandanwg Beach, with its Celtic Church in the dunes, and the Artro Estuary, the home of Llanbedr and Pensarn Yacht Club.

On the southern shores of the estuary lies Mochras, known locally as Shell Island because of the variety of crustacean life washed up on its shores.

Harlech's impressive backdrop is the Rhinog mountain range, some of the most rugged and remote terrain to be found in Wales. Two main valleys penetrate the range: one, Cwm Bychan, with its tranquil lake, leads to the Roman Steps, a Roman paved pack-horse way; from the second, Cwm Nantcol, rise the peaks of Rhinog Fawr and Rhinog Fach. The area affords a multitude of walks from stiff climbs for the experienced mountaineer to more gentle rambles and woodland trails.

Keen golfers can enjoy the spectacular setting of Harlech's Royal St. David's 18-hole link course and the angler will find an abundance of river, stream and lake fishing. Venture below ground and explore the old slate caverns in the hills around Harlech and see how the miners lived and worked. Or simply watch the magnificent sunsets across Tremadog Bay to the Lleyn Peninsula whilst sampling local produce in Harlech's fine restaurants and cafes.

No words can truly convey the unique combination of the Castle's grandeur, built seven centuries ago, and the prevailing natural beauty of Harlech and the surrounding area. It is therefore not surprising that it has been discovered by the film industry as the perfect setting.

Legend has it that once a person sets foot in Harlech, they will always return, drawn back to this land of myth, magic and mountains.

Harlech can be reached by road and rail. The main road routes are from the North via Chester, the East (M54) and the South either through Hereford and Worcester or from South Wales. The spectacular Cambrian Coast Railway Line is an experience in itself, linking the Intercity British Rail network to Meirionnydd via Shrewsbury. Coach companies also have tours which include Harlech.